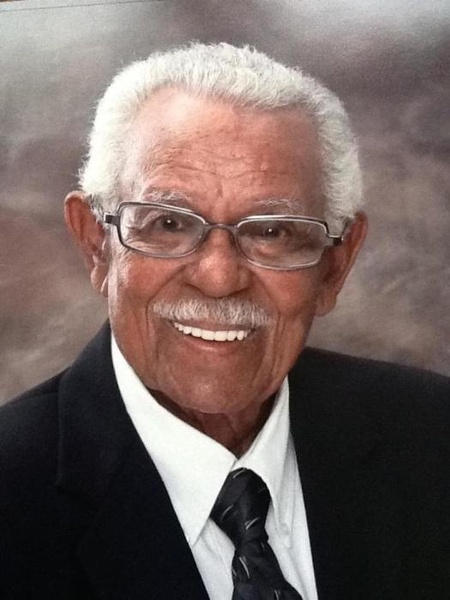 Beasley Martin was a doting father, grandfather, civic leader, and a man who was blessed with a kind heart. Beasley was born to the parentage of the late Clarence Martin and Willie Mae Martin on August 25, 1922, in Reform, Alabama. Beasley was proud of the small community where he was born and would get excited whenever he came across someone who knew of Pickens County. He was the oldest of seven children and was educated in Pickens County.

During the early 1940s, Beasley’s parents relocated the family to Childersburg, Alabama. After moving to Childersburg, Beasley enlisted in the U.S. Army. Beasley, who was a member of the “Greatest Generation,” landed on a Normandy beachhead on June 6, 1944. This historical event is known as the Normandy Invasion or D Day. On January 18, 1946, Beasley returned home from the military with four years of active service. After returning home from the military, Beasley was employed by the Childersburg Alabama Ordinance and later Anniston Army Depot, where he retired in 1978 with thirty-two years of service.

As if defending his country was not enough to define his service, he went on to be a Boy Scout Leader for twenty-one years and was awarded the Silver Beaver Medal for distinguished service. Beasley’s other civic duties included being a Charter Member of the Childersburg Citizens Advisory Committee; he was one of the original members of the Childersburg Heritage Society, now known as the Historic Heritage Preservation Society. Beasley was responsible for spearheading fundraisers for the United Givers Society and the American Red Cross. Later Beasley joined the ranks of other great civic leaders and was inducted into the Childersburg Chamber Hall of Fame in 2010.

Beasley accepted Christ at an early age and worked diligently at Pleasant Valley Christian Methodist Episcopal Church, where he was a member for over seventy years. Beasley served as Sunday School Superintendent and was a member of the Steward Board. There are many more accolades that could be laid upon this man of ninety-seven years, but the most important of them all is, he was a soldier for Christ.

On January 31, 1948, Beasley married Corrinne McKinney. They were blessed with one loving and devoted son. Beasley was preceded in death by his parents, his sister Christine Pruitt, his brother Willard Martin, his wife of sixty-one years, Corinne, special daughter, Alice Castleberry-Franklin and his step-son, Walter Wallace.

Aside from his community and church service, above all, Beasley was a family man. He leaves to cherish his memory, two sons; Beasley (Marian) Martin of Childersburg, AL, and Roosevelt (Kathleen) Garrett of Fontana, CA, one sister; Effie Williams of Childersburg, three brothers; Gary (Eva) Martin of Childersburg, James (Ola Bell) Martin of Philadelphia, PA and Millard Martin of Houston, TX, one sister-in-law; Bonnie  Threatt of Sylacauga, AL. He also leaves behind three loving and devoted grandchildren who acted as caregivers; Dabreion, Aramie, and Cleveland; a total of nine grandchildren, nine great-grands, two great-great-grands; a host of nieces, nephews, other family and friends including Mary Philistine Vincent, caregiver. Beasley will be missed by many but will never be forgotten.

To order memorial trees or send flowers to the family in memory of Beasley Martin, please visit our flower store.