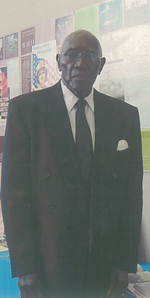 Deacon Charles Edward Powell was born April 11, 1922 to the late Alonza Powell and Mrs. Ella Mason Powell, in Greenville, Alabama.  Mr. Charles Powell accepted Christ at an early age, and joined the Shiloh Baptist Church, under the leadership of Pastor Alexander.  And served faithfully until death.

Deacon Powell was united in Holy Matrimony, to the Late Maebell Davis Powell on January 17, 1942, and to this union five children were born.

Deacon Powell served his country, and honors of a WWII Veteran.