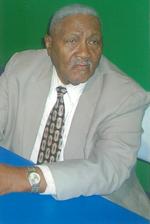 Mr. Barnett was born October 29, 1922 to the late John and Lula Barnett. After serving, in the United States Navy from March 3, 1944 to February 6, 1946, He was united in holy matrimony to the late Mrs. Irene Fambo Barnett on February 14, 1946, to this union ten children were born.  Mr. Barnett was preceded in death by his wife, Irene Barnett; one daughter, Christine Chatman; three sons, Curtis, Wayne,  Arthur; two sisters, Fannie B. Chambers and Sallie Bowman; and two brother, Roy and Oscar Barnett.

Mr. Barnett departed this life on March 15, 2013 at the V.A. Hospital in Birmingham, Alabama.

To order memorial trees or send flowers to the family in memory of Deacon Thomas Abner Barnett, please visit our flower store.