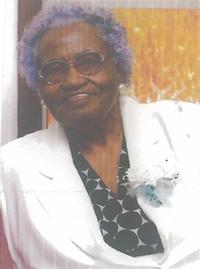 Ella G. Williams lived with a prayer and trustful expectation praying for a short spell in sickness and happy hour to die in. She was born on
December 3, 1918 in Dadeville, Alabama to the late John Greathouse and Hixie Porch Greathouse.

She joined the St. John Missionary Baptist Church in the Walco
Community at an early age. Serving faithfully as the Adult Womenâ€™s
Sunday School Teacher for over 30 years, was an enjoyable calling. She considered it a blessing to serve as the missionary president and to be a member of the senior choir.

She united in holy matrimony to the late Coley Dozier and to that union a baby girl was born. Later on in life she married Deacon Mike  Williams and spent 42 loving and devoted years until his death in July 2000. She was also preceded in death by her daughter, Mrs. Estella Dozier Hart and her grandson Burns G. Hart..

To order memorial trees or send flowers to the family in memory of Ella Williams, please visit our flower store.