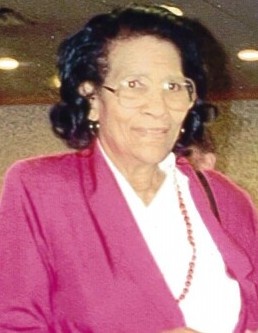 Mrs. Ethel M. Pope was born to the union of Turner and Lucille Clemons on September 25, 1927.


She received Christ at an early age at Coosa Valley Baptist Church, where she served as a choir member
and church secretary. She was also a member of the Sorrell Social Club and the Cheerful Giver’s Society.
She was educated in the Shelby County School System at Shelby Training School.
After school, she wed Vernon Kidd in 1947; to this union, three children were born: Clifford, Vernon,
and Janice. After Vernon’s transition, she met Charlie Louise Pope; they wed in 1952. To this union, two
children were born: Elaine and Christopher.

She enjoyed life; she loved to bake cakes, travel, and have family outings. She also became a seamstress.
She had no problem correcting you if you were doing something you shouldn’t. She loved Gospel music
such as “Never Would Have Made It,” “Amazing Grace,” “Precious Lord,” and “Order My Steps.”

She was preceded in death by her children, Vernon, Janice, and Christopher.

To order memorial trees or send flowers to the family in memory of Ethel Pope, please visit our flower store.