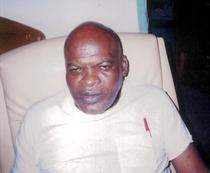 The sudden unexpected death of Brother George Washington Tillman Portis.  Leaving the family with heart felt sorrow, which cannot be expressed only God knows and can repair a broken heart.

He worked for Simsco, Inc. until retiring. He joined the Macedonia Missionary   Baptist Church in 1999 under the leadership of pastor Richard Kidd, Sr. George was a strong well respected man.