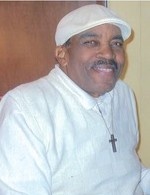 Joe Louis “Uncle Joe” WadsWorth, was born July 31, 1941, in Hamilton County, Tennessee to Joseph and Jessie Nix Wadsworth.  It was while living in Chattanooga, Tennessee that Joe accepted Christ at an early age and was baptized.  For most of his adult life, he was a faithful member of Harper Springs Baptist Church in Sylacauga, Alabama.

Upon relocating to Talladega County, Alabama, Joe graduated from Phyllis Wheatley High School in 1959.  For 60 years he was blessed to share his life, laughter and kindness with others through his work at Floyd and Beasley Transfer Company in Sycamore, Alabama, Talladega Foundry in Talladega, Alabama, Kimberly Clark in Childersburg, Alabama and Frontier Bank, in Sylacauga, Alabama.  After retiring in 2014 from Frontier Bank, he began working as a security guard with Delta Security.  It was through this job where he had many opportunities to assist families as a care-sitter at Coosa Valley Hospital in Sylacauga.

Joe’s favorite pastime was working on his farm while tending to his cherished cattle, horses and dogs. Demonstrating a quiet demeanor, he loved spending time just sitting on the porch and waving to those passing by.  An avid football fan, you could usually find Joe in front of the television enjoying a Saturday or Sunday afternoon game.

During the final months of his life, “Uncle Joe” was blessed to have the compassionate support and care of his niece Tracey Morant Adams and nephew Johnny Frank Nix.  He was very grateful to them for their kindness of spirit and generosity towards him.

To order memorial trees or send flowers to the family in memory of Joe Louis Wadsworth, please visit our flower store.