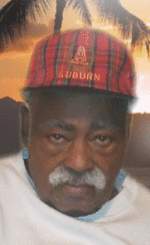 John L. Coleman was born to the union of the late Mr. Carl and Mrs. Pauline Coleman on January 1, 1933, in Talladega, Alabama. At an early age he confessed Christ, as his personal savior. Soon after, he became a member of the Mt. Zion Christian Methodist Episcopal Church, where he served as a devoted steward.
Mr. Coleman was employed by Alabama Power until his health failed. He was united in holy matrimony to Miss Betty Jean Johnson. To this union four children was born: one son and three daughters.
On Tuesday, March 26, 2013 God, in His infinite wisdom, saw fit to end the earthly voyage of our beloved. John departed this life in the comfort of his residence. He was preceded in death by: one daughter, Regina Coleman McMillan and one brother, Dennis Coleman.
He leaves to cherish his life, legacy, and love: three children, Cindy Coleman Norris of Chesterfield, VA, John Lutrell Coleman, and Veronica Jean Coleman, both of Sylacauga, AL; four sisters, Amanda Player of Sylacauga, AL, Lessie Mae Cook of Childersburg, AL, Lois Estelle of Anniston, AL, and Dorothy Coleman of Talladega, AL; a special great niece and nephew, Chase and Diamond Cook of Childersburg, AL; seven grandchildren; nine great-grandchildren; a host of nieces, nephews, cousins, and many friends.

To order memorial trees or send flowers to the family in memory of John L. Coleman, please visit our flower store.