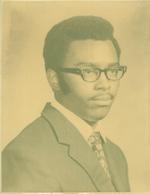 Funeral Service for Lyndale Olden, age 58, of Sylacauga will be held Saturday, December 17, 2011 at 1:00 P.M. from the Saint Thomas United Methodist Church with the Reverend Horace Blount, III, officiating. Interment will follow in the Sylacauga Cemetery.

Lyndale Olden was born to the union of Willie and Gracie Olden in Sylacaua, Alabama. His father; Willie Olden preceded him in death.

Lyndale accepted Christ at an early age. He was a graduated of Sylacauga High School and Wenonah State Junior College in Fairfeld, Alabama where he received an associated degree.

Lyndale taught Physical Education for seven years at Mountain View Elementary School. He also was a Barber and a Southern Gourmet Cook where he touched the lives of many people in and around Sylacauga.

To order memorial trees or send flowers to the family in memory of Lyndale Olden, please visit our flower store.