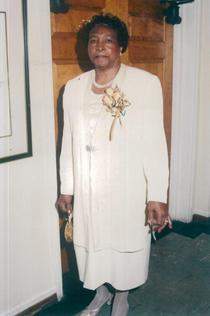 She Confessed hope in Christ and joined the Shiloh Baptist Church where she was very active. She served on the Usher Board, Deaconess, and Choir Member.

She was employed by Avondale Mills and Sylacauga Shell Cast.

Nora was united in Holy Matrimony with the late Mr. Silas E. Williams on March 5, 1949. To this union five children were born.  One child proceeded her in death Howard C. McKenzie.

She is also preceded in death by her parents, two sisters; Mary Alcie Stallworth and Ethel Mae McKenzie Junious, and one brother; Douglas McKenzie Jr.

She transitioned this life on Thursday, October 16, 2014 at Coosa Valley Medical
Center in Sylacauga, Alabama.

To order memorial trees or send flowers to the family in memory of Nora Pearl Williams, please visit our flower store.