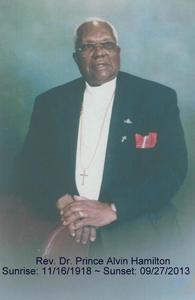 Rev. Hamilton was a World War II Veteran, entering the United States Army n 1943 and received an Honorable discharge, he was a member of the American Legion, and DAV.


Rev. as he was affectionately known was educated in the Camden County School System,, he attended Temple University Semminary, where he pledged Omega Psi Phi in 1947, and was a member of the Omega Psi Phi Fraternity, Eta Omega in good Standing at the time of his passing. He attended Glassboro State Teachers College, Glassboro, NJ and received his Masters in Divinity from Andover Newton Theological Seminary, in Newton, MA.


Romans 8:28 " All things work together for the good, to them that love God, to them who are called according to His purpose." Those of us who knew Rev. Hamilton know that he loved the Lord and loved doing the work of his Lord & Savior. Before Rev. Hamiltonwas a full time Pastor he worked for Pennsylvania Railroad Company. Rev. Hamilton was a Pastor in the UAME Church  Union American Methodist Episcopal Church, 2nd Episcopal District, and retired from the A.M.E.  African Methodist Episcopal Zion Church after 45 years of service.  Rev. was a dedicated servant of God throughout his life, serving in various roles as a member of the Clergy  for more than six decades. Rev. loved the Lord and mentored many on their journey to becoming a member of the Clergy, Rev. Patricia Gillman is just one example.

Rev. Hamilton was also a " Freedom Rider," in the 1960's marching alongside of the late Rev. Dr. Martin Luther King, Jr. and the Rev. Dr. Wyatt T. Walker, during the Civil Rights Movement, the March on Selma, Montgomery & Brimingham, Ala.

He was known for his sharp memory, as he would never forget a friend he met.  At 94 his memory was still sharp, his love for God never waivered and he was happy to encourage the young to strive to be be his or her best.

To order memorial trees or send flowers to the family in memory of Prince Alvin Hamilton, please visit our flower store.